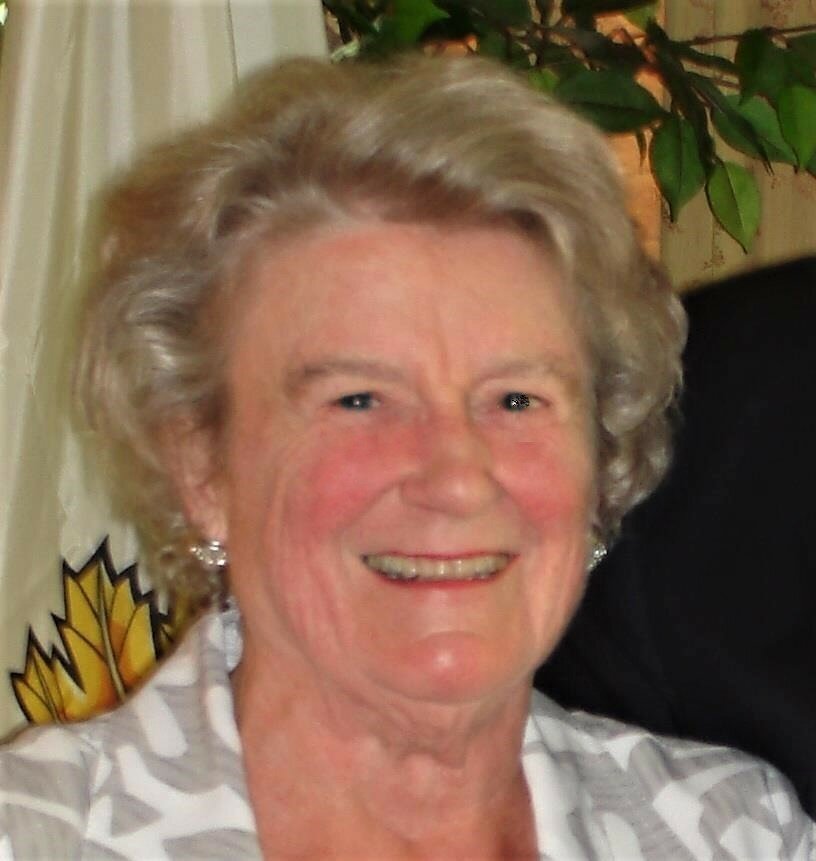 A reception will follow the service at Owens Art Gallery (Masks and Proof of Vaccination required by building policy).

To view a live stream of the service, see the link at the bottom of the obituary.​​​​​​

It is with deep sadness that the family announces the passing of Joyce Ferguson on April, 6th, 2022 at the age of 85 in the Moncton Hospital after a brief stay.

Joyce was predeceased by her husband, Dr. Laing Ferguson and her parents, Robert and Winifred (Nicol) Kirk. Joyce is survived by her sons, Neil (Elizabeth), Andrew (Marlyn) and Kirk, as well as by her four grandchildren, Jonathan, Liam, Caleigh and Hillary. She will also be greatly missed by many friends and relatives in Canada and the United Kingdom.

Katherine Joyce Kirk was born in Glasgow, Scotland, on April 23rd, 1936, the only child to Robert and Winifred Kirk. She grew up in Dumfries, Scotland and as a teenager attended Lowther College in North Wales. She received her MA degree in English and History from the University of Edinburgh in 1958. It was at university that she met Laing Ferguson and the couple married in Dumfries in 1960. A month after their wedding they made the big move to Edmonton, Alberta where Laing held a Postdoctoral Fellowship.

In 1962 after the birth of their first son they moved to Sackville N.B. where Laing had accepted a teaching position in the Geology Department at Mount Allison University. Joyce and Laing had two more sons and in 1970 Joyce took the position of Executive Secretary to Gwendolyn Black while she was the National President of the Canadian Federation of University Women. In 1972 Joyce started working as Office Administrator at the Maritime Conference Office of the United Church of Canada in Sackville. In 1982 she became the Administrative Assistant to the Director of Research Administration at Mount Allison University and in 1987 also took on the duties of Administrative Assistant to the Office of the President at Mount Allison until her retirement in 1993.

Joyce was also involved in lots of volunteer community work while living in Sackville: Mount Allison Women's Association (Past President); Board of Trustees, Sackville Memorial Hospital - member of Executive Committee (1975-82); Sackville Swim Club - President 1979-81; Board of School Trustees, District 14, N.B. - Vice Chair, 1981-83, Chair; 1983-89; Minister's Advisory Committee on Women's Issues in Education, Government of New Brunswick - Vice-Chair, 1989-90, Chair 1990-93; Friends of the Owens Art Gallery - Chair 1996 - 2008; Sackville Art Association - President, 1997; Tantramar Health Forum, South-East Health Care Corporation - Chair 1997 - 2000, and past Member of the Sackville Rotary Club. Joyce was honoured for all of her contributions to the Sackville community when she was awarded a "Queen's Diamond Jubilee Medal" at a ceremony in 2013.

Joyce was also a fantastic cook, an excellent golfer, a painter, loved to travel, an avid reader and local Book Club member, bridge player, gardener and a member of Sackville's "Once In A While Club", "The Birthday Girls" and "The Old Broads".

The family would like to thank Joyce's doctors, Dr. Roshni Kanji, Dr. Ross Thomas, and Dr. Robyn Comeau for their care of Joyce over the years and recently, as well as the doctors and staff at the Moncton Hospital for her excellent care in recent months.

For those who wish, donations to The Canadian Cancer Society or the charity of your choice in her name would be appreciated.

Arrangements have been entrusted to Erin Campbell and staff of Campbell’s Funeral Home, 89 Bridge Street, Sackville, N.B. (364-8188). A memorial service will take place at the Mount Allison University Chapel on Wednesday, May 4th, 2022 at 1 pm (masks required) with a reception to follow at Owens Art Gallery (Masks and Proof of Vaccination required by building policy).

To view a live stream of the service, go to the following link - https://www.youtube.com/channel/UCum4XJaNq6L8p7y9IdlUDtQ

Online condolences and sharing of memories may be forwarded to the family through our website www.campbellsfuneralhome.com or by visiting the funeral home Facebook page.

Share Your Memory of
Joyce
Upload Your Memory View All Memories
Be the first to upload a memory!
Share A Memory