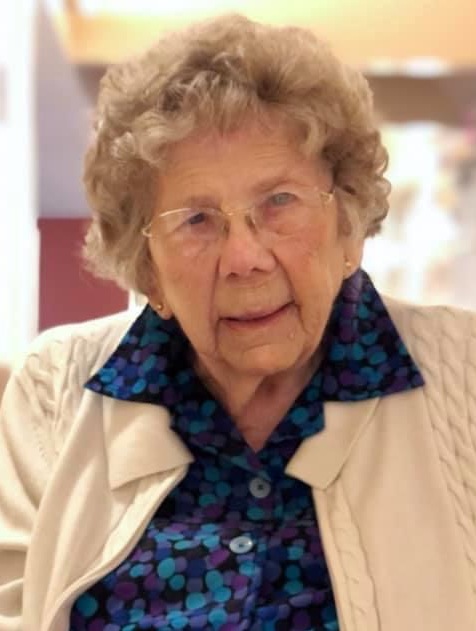 It is with a heavy heart that the family of Edna Helen Snowdon, announces her passing at the Drew Nursing Home at 98 years of age on 19 October 2021.

Edna was the wife of the late Herbert Alma Snowdon of Sackville and very special friend of the late Fred Wamboldt, Mill Village, NS.

She was born in Wymark, SK., on February 11, 1923 to the late Barney and Edna Newfield of Port Alberni, BC., the second oldest of 10 children.

Although most of her life has been spent in Sackville, her love for parents and siblings meant several driving trips across Canada ending on Vancouver Island.  One of those family adventures was in a Volkswagen beetle towing a one-wheeled trailer and camping in a tent at roadside with a number of stops to visit relatives in every province.

She is survived by a brother John (Anne) who resides in Port Alberni, BC, and 5 sisters-in-law, Bernice, Dorothy, Dora, Francis & Barb.

Her death marks the end of a life that was full of love for family and friends. She was the glue that frequently called us to Sackville. Nothing made her happier than when we were all together.

Gram was loved by all her grandchildren and will be remembered for her baking and homemade knitted gifts & card games.  Mom loved babies and was there for the birth of all of her 8 grandchildren, Lori, Leah, Tami, Scott, Kelly, Shane, Ryan and Shannon.  She was blessed with 9 great-grandchildren, Kaitlyn, Zachary, Melisa, David, Mathew, William, Melanie, Duke and Beau, as well as by 2 great-great grandchildren, William and Charlie. She never forgot a birthday, there was always a card with money tucked inside. Her heart was huge.

Edna will be fondly remembered by the Wamboldt family in Nova Scotia & her many relatives & friends from coast to coast.

The family wishes to express thanks for the care and kindness provided at the Drew Nursing Home, especially in her last days. Also, thanks to her friends at the Hospital Walking Club & neighbors at the Drew Cottages for their love & friendship.

Funeral arrangements have been entrusted to Campbell’s Funeral Home, 89 Bridge Street, Sackville N.B. (506) 364-8188. A private graveside service for family & friends will be held at Westcock Cemetery at a later date.

If you wish to make a donation in Edna’s memory, do so to the Sackville Hospital, the Westcock Cemetery or to the charity of your choice.

On-line condolences & sharing of memories may be forwarded to the family through our website www.campbellsfuneralhome.com or by visiting the funeral home Facebook page.

Share Your Memory of
Edna
Upload Your Memory View All Memories
Be the first to upload a memory!