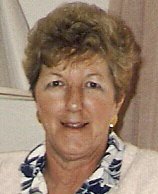 Following the service at the cemetery, family and friends are invited to gather at 2047 Aboujagne Road for light refreshments and fellowship.

Mrs. Carolyn Joyce Richards (Mitton), age 75, of Sackville passed away peacefully Thursday June 10, 2021 at the Drew. She was born November 30, 1945 in Sackville, NB to the late Sanford and Myrtle Mitton. Carolyn was preceded in death by her husband of 59 years, Robert Layton Richards and her brothers, Cedric (Noreen), Reg (Alma), Bill (Gloria) and Edward (Florence).

Carolyn was an avid crafter, seamstress and gardener. She loved to spend her time sewing and knitting items for her grandchildren. Carolyn and her family moved West to Calgary from Sackville in 1971. Out West, she discovered a love for tole painting. She loved to paint ceramics, and often made holiday decorations for her friends and family. Her love of painting took her annually on a mountain retreat, where she and her group of tole painting friends practiced new techniques.

Carolyn also loved the mountains for camping. She and her husband Robert owned a motorhome, and they would spend their weekends and holidays exploring the country, camping along the way. In addition to camping holidays, Carolyn and Robert loved to escape the cold Canadian winters, enjoying beach holidays that took them to Hawaii, Tahiti, Aruba, Antigua, Jamaica, Arizona, California and Mexico. Carolyn always collected seashells from the beaches she travelled; she had a whole box of shells that she would bring out to show her grandchildren, telling them stories about where she found them.

In the 1970’s, she found a career at Alberta Bank Note, where she worked until her retirement in 1980. After a few years, she ended up going back to work at Office Overload, which she enjoyed because it offered her a challenge and kept her sharp. Her love of travel extended into working as a freelance travel agent in retirement as well. Soon after her husband’s retirement in 1998, however, they made the decision to pack up and move home to Sackville to live out their retirement and be with relatives. She enjoyed travelling out West every few years to celebrate the milestones of her grandchildren.

Her greatest enjoyment of all, was being “Grammy” to her grandchildren. She would cook for them, take them for bike rides, host sleepovers, and taught them her love of sewing and painting ceramics. She enjoyed their visits to New Brunswick and would always plan an adventurous car trip to share the sights around the coast.

In recent years, as her health declined, Carolyn moved to her residence at the Drew. The family cannot express enough gratitude to the various staff, nurses and doctors of the Drew for the wonderful care they provided.

Funeral arrangements have been entrusted to Campbell’s Funeral Home, 89 Bridge Street, Sackville N.B. (506) 364-8188. In keeping with her wishes, there will be no service at this time.

Those who wish to honour Carolyn’s memory may do so by donating to the Midgic Cemetery, or the War Amps of Canada.

Share Your Memory of
Carolyn
Upload Your Memory View All Memories
Be the first to upload a memory!
Share A Memory