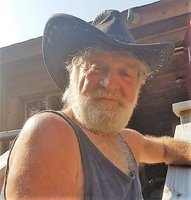 It is with deep sadness that the family of Blair Richard announces his passing on Monday, March 23, 2020 at the Sackville Memorial Hospital. Blair passed away following a brave battle with cancer, at the age of 65. Born on October 31, 1954 in Sackville, NB, he was the son of the late Blair Richard and Doreen (Snow) Phinney. Blair was a very hard worker and worked several years on the Carter family farm here in town. He enjoyed doing body work on vehicles, loved music and he loved to dance. It would be nothing for Blair to pull out the spoons and play along if someone was playing the guitar and he would always sing along if a guitar was out. Blair travelled all over Canada either by car or foot and when he was younger, when the seasons changed, he would always get the itch and start to travel across the country. Blair will be lovingly remembered by his spouse, Cathy Simon; his brothers and sisters, Pauline (Don) of Sault Ste. Marie, ON, Bernice (Steve) of Bracebridge, ON, Elaine of Shediac, NB, Marlene of Rockport, NB, Jeanine (Leroy) of Sackville, NB, Sheldon of Sackville, NB, Terry (Shelley) of Sackville, NB and Anna of Rockport, NB; his children, Lisa of Moncton, NB, Michael of Bowmanville, ON, Renee of Calgary, AB and Josh of Calgary, AB; his step-children, Lori of Big Cove, NB, Steven of Moncton, NB and Stacey of Big Cove, NB, as well as by many nieces and nephews. Besides his parents, he was pre-deceased by his brother, Alyre Richard, as well as by his brother-in-law, Edward Christie. Arrangements have been entrusted to Campbell’s Funeral Home, 89 Bridge Street, Sackville, N.B. (506) 364-8188. In keeping with Blair’s wishes, there will be no visiting hours or funeral service. If so desired, donations in memory of Blair may be made to assist the family with funeral expenses or to the charity of one’s choice. On-line condolences & sharing of memories may be forwarded to the family through our website, www.campbellsfuneralhome.com or by visiting the funeral home Facebook page.